3 Steps to Making the Impossible Possible

Philip Knight had a crazy idea in the early 1960s. He decided to sell imported running shoes from the back of his station wagon in Portland, Oregon. As an auditor he was financially astute and figured he could make money by purchasing shoes from Japan and selling them in the U.S. His shoes were improved in the later part of 1963 when he was joined in this venture by his college coach. Coach William Bowerman modified the imported shoes to make them better. Their start-up investment was $1,000.  Today, NIKE Incorporated has a market value of $90 billion. When it comes to impossible tasks, “Just Do It!”

Do you face an impossible situation? Are you being challenged with a new job, unruly children, an unsupportive spouse, or a defeating habit?

Here are three principles that will enable you to do the impossible.

1.      Never underestimate the potency of action.

Procrastination is the death blow to many people accomplishing an impossible task. Procrastinators make these statements:

“I’ll do it later after I get organized.”

“I have been rejected so many times I can’t try again.”

“I don’t want to start that now because I don’t need the extra work.”

Success does not come to those who wait. Winners are men and women of action.  And, let’s face it, these individuals are rare.

“Chariots of Fire” won the top film award in 1982. It was a story about two runners who were determined to win. Harold Abrahams and Eric Liddell won gold medals at the 1924 Paris Olympics. One scene in the movie depicts Abrahams as being incredibly discouraged and wanted to quit after he lost a race to Liddell. He blurted out to a friend, “I run to win. If I don’t win, I don’t run.” To which she angrily replied, “And if you don’t run, you won’t win.” He ran again. And won. The point is that inactivity never accomplishes anything. People who do the impossible don’t watch things happen, they make things happen. They are men and women of action.

2.      Never underestimate the presence of God.

Impossible situations are like mountains. They loom large invoking feelings of smallness and inadequacy on our part. In comparison to our tasks we often sense that we do not measure up. To our feelings and internal sensing, God has some encouragement—you are not expected to fight your battles alone. God’s higher presence accompanies you as you face your impossible task. God is not in the business of deserting his people when they face impossible tasks. In fact, that is when one can become more aware of his presence.

Ignace Paderewski, the famous Polish concert pianist, was getting ready for a concert when a young boy wandered up on stage and began playing “Chop Sticks” on the great Steinway. When the curtain was drawn back for Paderewski’s entrance the audience eyed the boy and started yelling for him to get off the stage. Paderewski walked to the boy and whispered, “Don’t quit, keep playing.”  As the boy continued, the great master put one arm around the him and filled in a bass part and with the other arm around him he filled in the melody. There, the great master and the young novice mesmerized the audience.

When I think of that story I think of God’s presence in my life. Because so often I feel like that little boy. I grew up very shy and withdrawn and extremely introverted. I came into this world as a part of a packaged deal. I have a twin brother. And I know why. Because my twin has always been extremely extroverted. He was my mouthpiece for the first part of my life. I was called to preach while I was in high school. When others heard about this calling they said, “You mean his brother, don’t you? Rick is too shy to be a preacher!”

While I have overcome much of my shyness and feel fairly comfortable around people now, I still face an impossible situation each week. It is standing before my congregation to preach. But each time I stand before an audience to deliver God’s message I feel the arms of God wrapping around me, comforting me, encouraging me, reminding me of his presence in my life, saying to me, “Don’t quit. Keep playing.” And so I trust God as he helps me in accomplishing my impossible task.

If you want to accomplish an impossible task, focus on God’s presence.  Realize that God is always with you. Learn to sense his accompanying attendance.

Got any rivers that are uncrossable.

Got any mountains you can’t tunnel through.

He can do what no other power can do.

Consider just a few of these “famous last words” we might have heard from characters in the Bible:

“An ark?  But it’s never rained before.”

“You can roll the stone in place now. That’s the last we’ll see of him.”

The historical record of Scripture demonstrates again and again that God is not bound by our expectations. We can’t always predict what he will do. He is an awesome God that works in powerful ways.

Fear keeps us from starting our trek to accomplish our impossible task. The promise of God’s power gets us started and keeps us going. It has been said that courage is not the absence of fear but the ability to walk on in spite of it. That’s what God’s power does for us. It enables us to get started and keep going.

We need to understand that our strength comes from God who is never weary or faint. Throughout Scripture we are commanded to “Be strong.” This order is an impossible command to obey unless our God imparts his strength to us. But that is God’s specialty. He has tipped the scales in favor of many a weak one. We can try all we want but we have not utilized all the strength that is available to us until we draw upon the Lord—the source of all strength.

Will you, in the power of God and with the presence of God accompanying you, get started on your impossible task? Today? If you refuse your commission because of fear or feelings of inadequacy, you will make a terrible mistake. If you turn down your opportunity for achievement you will rob yourself of the greatest adventure of your life. If, out of fear, you fail to reach for your impossibility you will miss out on the fulfilling of your life’s dream. If you choose not to act, you may bypass the purpose for which you were born.

One of my most popular books, The 7 Sins of Highly Defective People, takes a twenty-first century look at the seven deadly sins and offers advice on how, through Christ, we can overcome them. The book is a repair guide that will take you from highly defective to highly effective in your Christian walk. Click here to claim your copy.

I am a husband, father, pastor, and writer. This blog is about shaping character, transforming church, and impacting culture. I believe that if one defines their moments then their moments will determine their character and their character will influence their world. I write on personal development, church leadership, and our changing culture. I also write about the resources I am developing and the books I am writing. My goal is to create challenging, relevant, and inspiring content that will help you be a better person, the church be a better parish, and the world a better place. If you are interested in those things, this blog is for you. I have served the church my entire career as a student minister and senior pastor. I studied at Samford University, Midwestern Baptist Theological Seminary, Southern Baptist Theological Seminary, and Northern Baptist Theological Seminary (eventually I will get it). I have written eight books. My most recent ones are Chapter 13: The Excellence of Love and Soul Therapy: The Healing Words of Psalm 23. Both are available as eBooks. I have written over 1000 articles for various local, regional, and national publications. I have been married to Cindy for thirty-three years. We have one wonderful daughter. We live in Greenville, SC. In my free time, I enjoy writing, reading, running, tennis, and golf. You can contact me via email or follow me on Twitter or Facebook. This is my personal blog. The opinions I express here do not necessarily represent those of my employer. The information I provide is on an as-is basis. I make no representations as to accuracy, completeness, correctness, suitability, or validity of any information on this blog and will not be liable for any errors, omissions, or delays in this information or any losses, injuries, or damages arising from its use.
View all posts by Rick Ezell →
This entry was posted in Uncategorized. Bookmark the permalink. 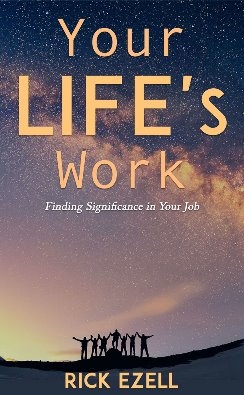